To you, rabble of the internet!

First my apologies for my bad English, but I thought it may be appropriate. And then I just wanted to post the article and not think so much about the text. It is about pictures anyway. So let’s get on with it.

I give to you these fine pictures, examples of the most outstanding craftmanship, open doors to the sensitive mind of the artist as it lays bare before you. As the educated observer can see on first sight the pictures tell a story – a story most human, tragic, hilarious, a story which belongs to the corpus of those tales as old as mankind, a story which raises the great questions about human life itself – where do we come from, where do we go, what about god, are questions separated by commas even proper questions – a story about owl zombies feeding on the brains of the living – bringing mankind to the brink of extinction – and a story – about the – extensive use of – hyphens. 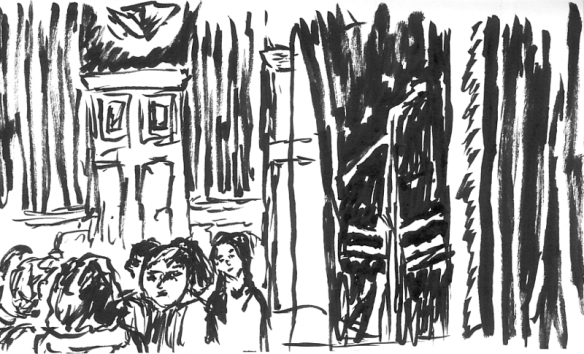 It all began in a dark crowded room with badly drawn faces and a microphone barely visible in the mess of black lines on stage.

A guy walked on stage and told the crowd: „We are DOOMED!“ Then he dissolved into bright white light, destroying everything around him. 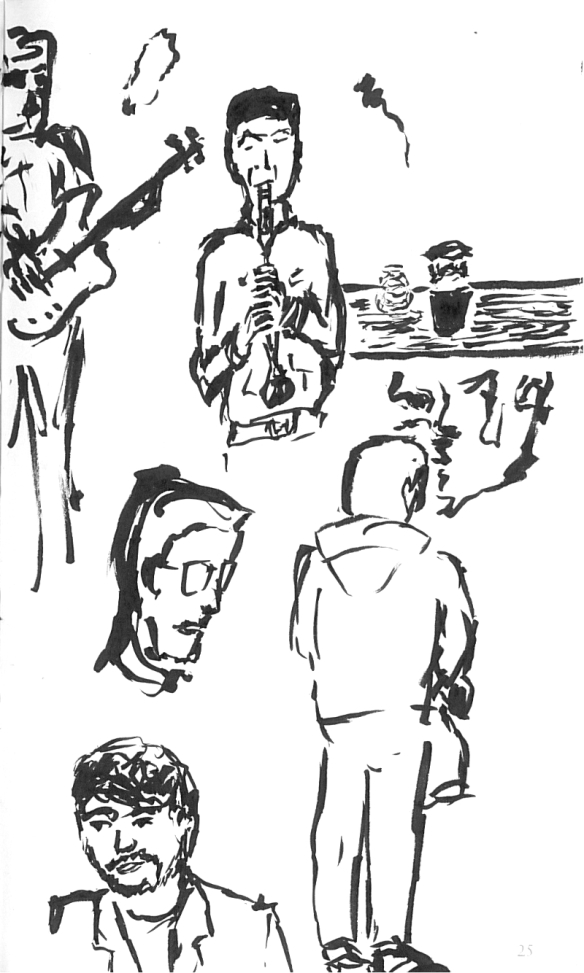 Everybody was upset, so a guy with a electric bass and someone with a clarinet took the stage and played some music. Meanwhile glasses-guy, beard-man and hoodie-boy had a plan … 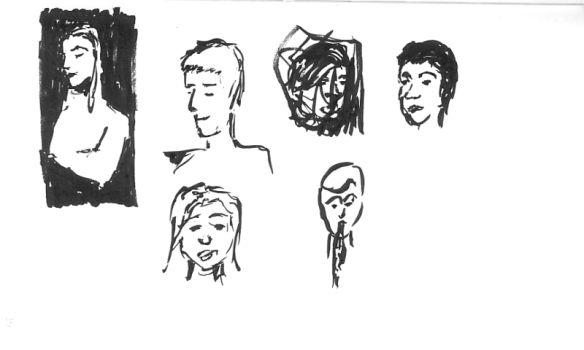 Beard-man, glasses-guy and hoodie-boy were searching for six wise persons of knowledge, one of whom was trapped behind black lines. But if all six persons of knowledge were not united they could not activate their secret superpower, which was extremely important to save the world.

Things got messy when the penguin turned into a giant space snail and attacked. It was pure luck that saxophone-girl was around to fight the penguin in form of a giant space snail and save the day, to the delight of beard man, who had changed the shape of his head. However, someone died. The scene ended with a mysterious shot showing only the legs and a small notebook of a person sitting in an armchair. Was he the leader of the owl zombies?

As beard-man, glasses-guy and hoodie-boy did their best to save the world more and more people fell victim to the brain loving owl zombies.

Finally the second eye of the mysterious woman was found. Treebrain had stolen it a long time ago, but he did not want it any more as it made his friend, the bird, sick. 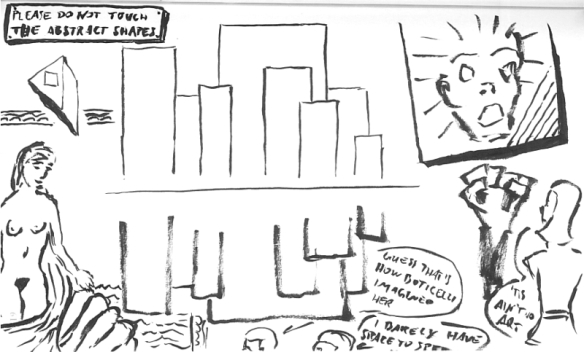 Tentacle man was convinced that visiting a museum was much like visiting a party … that dumb fool. (No, this has to be changed. Don’t we have some spare pictures? No? This is absolutely indecent. You can even see her … hair. Has to changed before publication. And to say Botticelli (with double t you fool) had such profane thoughts – this is an insult to the western art tradition. Has definitely to be changed.)

The fate of the speaking beer was the drainage as it said: „The pen is mightier than the sink!“ The beer, however, did not have a pen.

Intermission. (Intermission? WTF?! We do not need any intermission. What is this rude carp anyway? „Full frontal nudity“?? This is a highly sophisticated story about mankind fighting for survival. We do not need cheap dirty sex in here! And making the man into a sex object of women?! You can even see his penis! No, no, no, no! This will not make it! As women would have sexual desires anyway! Pah! NO WAY!) 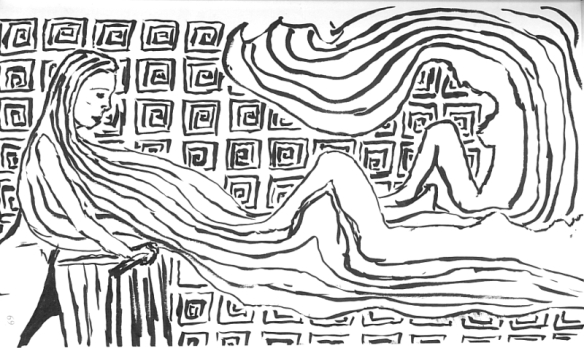 As beard-man, glasses-guy and hoodie-boy had done everything to free the sixth wise person of knowledge, the six wise persons of knowledge transformed into a naked woman with long hair on a balcony. She sent out an army of squared spirals to fight the owl zombies. (Even this might be still a little bit indecent, this is much better than the intermission. Naked women have a long tradition in high arts and are much more aesthetic anyway. And you can not see any genitals. Go on, go on.)

The squared spirals defeated the owl zombies and the sun rose again above the ruins of civilization. People were dancing in darkness and light.

The people were still dancing, everything was good. But wait! They were dancing to „99 Luftballons“! And the mysterious scribbling person was still scribbling and enjoying a cheap beer! And was this giraffe about to resurrect the mighty penguin? And indeed: What about these black spots?
Hopefully not to be continued …

These pictures are arranged in order of their creation.